A campaign to tackle the growing problem of knife crime in Nottingham is being supported by the building supplies company Frank Key for the sixth year.

The ‘Taken Too Soon’ campaign works with local communities to help disadvantaged young people with the aim to tackle the increasing number of knife crime incidents in and around Nottingham.

According to the campaigners, last year showed the biggest increase in knife crime in the city since pre-2011 and also revealed the spread of incidents throughout all areas of Nottingham and Nottinghamshire.

Frank Key was first involved with the Taken Too Soon campaign six years ago, donating the materials and supplies needed to renovate the changing room facilities and the clubhouse at The Inspire Stadium.

Roger Henry, project leader for ‘Taken Too Soon’ said; “Frank Key wasted no time in donating the materials we needed to help renovate The Inspire Stadium. Having this facility has meant we’ve been able to help thousands of disengaged, underrepresented and disadvantaged young people stay away from crime and go on to lead constructive lives.

“The support of sponsors such as Frank Key will not just help to tackle serious violence and knife crime but will help organisations that provide holistic welfare support to local families and reduce unemployment.”

Frank Key’s Group MD James Norton commented; “ We are very proud to support Taken Too Soon and to be one of the sponsors for the fundraiser football match. We hope the money raised from this event makes a huge difference in the lives of disadvantaged youth around our city. ”

Frank Key is an independent family-owned company with its HQ in the Daybrook, Nottingham and branches across Nottinghamshire, Derbyshire and Yorkshire. It has an ongoing programme of charitable donations and supports many local community groups and campaigns. 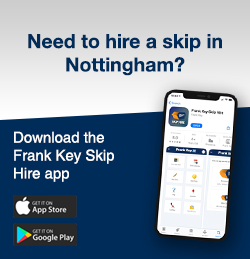